When I was searching for a link to the University of Paris at Nanterre for reference in an earlier post, it brought back memories of a previously turbulent time in our world. As I write this, honestly, my breath stops . . . because it seems like we have returned to the turbulent 60’s and 70’s.  It is often that I read and view nearly the very same thing happening today. My home town of Seattle is no stranger to unrest.

My father was a Seattle police officer during those times.   . . . and yes his life and health were under threat . . . more than once.

He was a member of the police drill team, who performed in community parades unarmed. Who had to arm themselves the summer of ’67 due to threats similar to today. When my dad left for work, I feared for his life.

He was spat on, had rocks and bottles thrown at him during the “peaceful” protests.  I remember when the Seattle police were issued their first set of “riot” gear. Dad was very unhappy. He told us he was now going to look like a soldier instead of a  policeman.  They were also issued big sticks. He said, ” this stuff is going to translate terribly on camera.” “The press is going to have a field day with this.”

The first big protest at the UW that year was during daffodil season.  He and his brothers and sisters attached “daffs” with rubber bands to the ends of the sticks, in an effort not to look intimidating. They hated the riot gear.  Working the protests was not fun. It was the first time dad heard pretty young co-eds hurling the F-word along with rocks, bottles and spit.  It all made him sad and worried about where our world was headed.  My dad was called a “PIG” and my brothers and I were called “Narcs” when we were in high school. We didn’t whine about the name calling. We just took it in stride.  Like most of life’s tougher experiences, it makes one stronger and more aware. 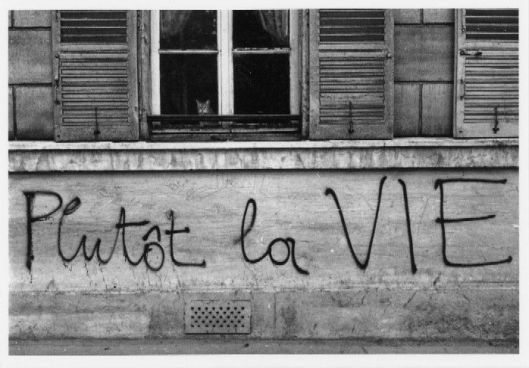 In the summer of 1969, I participated in summer study program in Europe. We attended classes at several colleges. One of the colleges where we attended school was Paris West University Nanterre La Défense.

Before we entered the campus, our advisors / chaperones informed us that the students on this campus were very angry at America and Americans. They informed us that the buses carrying American students that had arrived before us, had been hit with molotov cocktails. You could tell the advisors were masking their fear as they calmly spoke (warned) us. We were told to be friendly and go about our business, and to try our best to avoid confrontation.

When I entered my assigned dorm room, above the bed was ugly graffiti . . . an ugly statement directed towards presidents Kennedy,  Johnson, and Nixon involving three swastikas used as “plus” signs . . . yes swastikas . . . ending in an ugly answer to the equation. This was scary stuff for a seventeen year old far from home. I promptly unpacked three posters purchased along the way and covered up the wall. This was not a hotel. I couldn’t request another room. It was going to be my residence for a short while.

We had just left Strasbourg . . . just one week prior,  I had walked among ruins of WWII. I was not going to sleep beneath a swastika.

When we weren’t in class, we took the train to play in Paris.  Our visit timed with Bastille Day, where I stood with my friends on the edge of the Champs Elyesee . . . where I craned my neck to see the recently retired Charles D’Gaulle and the new president, Georges Pompidou.   I was living in world history. It was a dream come true.

I had my picture taken with a French police officer. I did this in each country I visited, to make a little photo album for my father.  Police love a handshake and a photo. Not one turned me down when I told them the photo was for my father who is a police officer in America.

When we would return to the dorm at night, the French students would harass us. We would smile, offer a friendly nod, and move on to gather in our hallway to sing songs like the “Love Theme From Romeo and Juliet”, and “Leavin’ On a Jet Plane”,  accompanied by our newly purchased  Melodica’s, (travelling keyboards), before retiring for the night.

One night, the students seemed a little friendlier. We stopped to talk. They spoke perfect English.  We told the students that we were here to study because we wanted to see their country and learn more about their history and culture. We decided, instead of avoiding one another . . . we should spend some evenings in the lobby to getting to know each other.

On the next evening, after Paris, coffee was brewing in the lobby of our dorm. The French students awaited our return.  We talked, shared world views, talked about where we lived in America, and shared that we too, did not always agree about the choices of our government.  The ritual continued until we departed. After our stay, the French advisor told our advisor, that the French students enjoyed our visit.  Our advisor told us he was proud of us. He said that we were the first group of American students who visited without retaliation. He told us we were wonderful American ambassadors.

The title of our summer program was . . . Travel Study International / Student Ambassadors to Europe.  I know most in our group embraced the term “ambassador”.  We felt very “cool” representing our country abroad. We felt very proud to have brought our best (American) hearts to  Nanterre.

Sending my best heart to France . . .