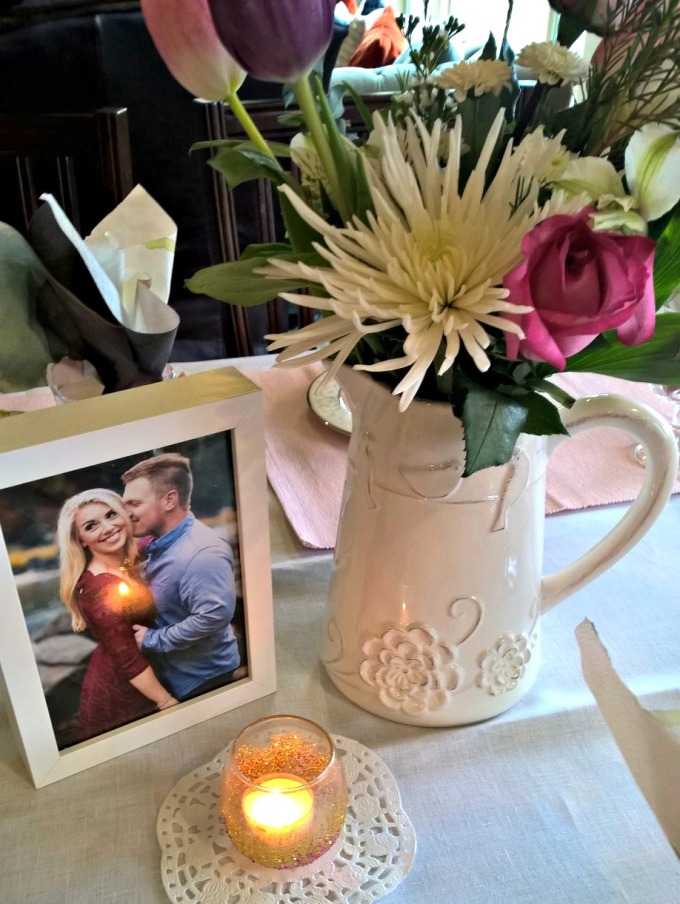 For the past several days, I have been in a state of reflection, grabbing moments of rest between a back to normal routine and finishing the taxes.  (Whew hooooo!)

My birdies were all together under one eave!

The “Shower With Love” weekend! 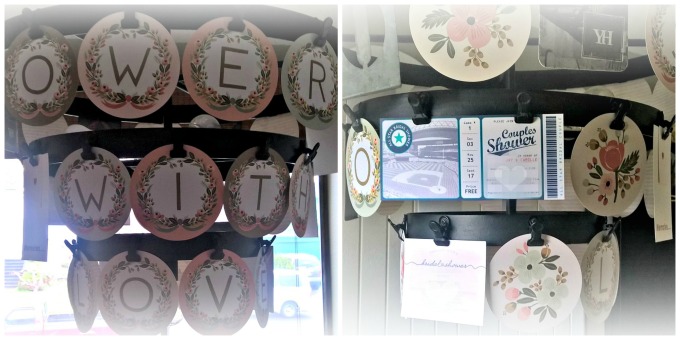 To set the mood for the weekend, I restyled my funky Chandelier. I also restyled Chrislyn’s old room to include a full size bed, so we could host Camille’s mom and dad.  ( I apologize for the poor photography here. The days have been overcast and rainy. To be honest, beautifuls, most of the images here were captured on the fly! )

Jay flew the nest on 34 about eight and a half years ago to pursue his dream of becoming a sports journalist / broadcaster.  After college, and an internship at Fox Sports Northwest, (now Root Sports), he accepted a position as sports director at KLEW, in a sweet little town in the state of Idaho called Lewiston, not far from Pullman, Washington, where he attended Washington State University.  He was in Lewiston three years, when he was approached by Boise’s prominent news station KTVB.

When he moved to Boise, I said a little prayer, and shared the prayer with my soul sister, C.J.  (Love you and miss you every day, C.J. I am over the moon watching you and the Murster soaking in your warm and fun-filled retirement via Facebook.)  I prayed for him to meet a girl. I even added a few characteristics, traits and ideals.

About two-ish years later, my prayers were answered . . . at a country club golf tournament when a pretty co-ed working her way through Boise State University drove a golf cart to offer beverages to a foursome that included my son.  (She told me she fell in love with his smile.)

I said . . . “Jay, there is no harm in asking her out . . . a date would be good for you.” ( I was beginning to become concerned as his work ethic and schedule had kept him out of the dating scene for a few years.  Jay has a good and guarded heart. He had only two steady girlfriends before meeting Camille. Due to his dedication to school and baseball, other than school dances, he did not begin dating until college. )

A little over four years have passed since the match and the phone call.

“Looking to keep the date fun and light-hearted with a girl I hardly knew, I took her to Dave and Busters to play games, then we went to the grocery store, made homemade pizza and watched a super manly movie called “How To Lose A Guy In 10 Days.”

“Four years ago today: The Response”

“Wondering if the movie was a hint, I was finally convinced it wasn’t when she actually answered my phone call the next day.”

“As the saying goes, the rest is history, and now I get to marry this woman in 131 days.”

“We’re four years into this journey with a lifetime to go! You always make me look forward to the next day, the next memory.” 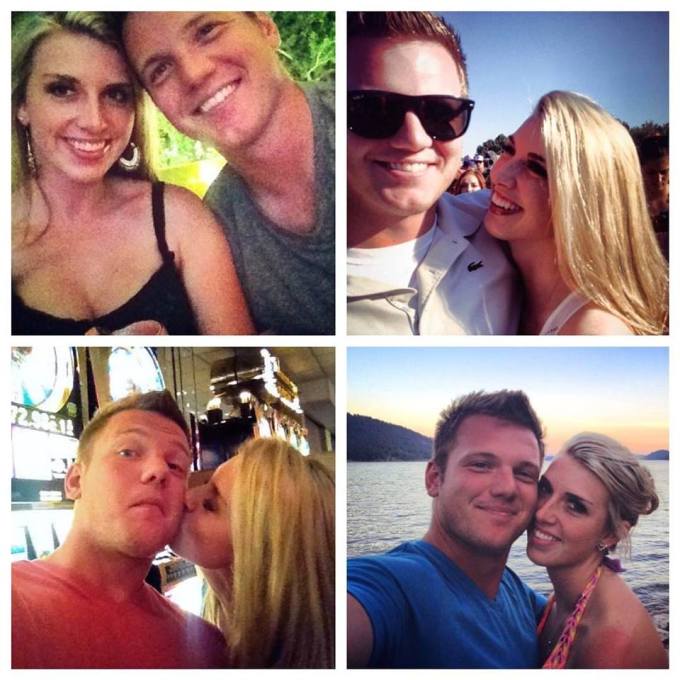 “Today Jay asked me what my favorite memory of us was. A million memories flashed before me, but of course the most memorable one was most recent, when he asked me to marry him, so that’s what I said. I asked him the same question and he said, “Probably the first time I brought you home to meet my parents.” After that we kept thinking of other great memories we’ve shared together. We sat there laughing, smiling, and reminiscing over old memories that seem so long ago, that mean so much to us.”

“Today not only made me realize just how lucky I am to have this man in my life, but also made me realize how he would do anything just to make me happy. So thank you for making me the happiest girl alive. My mom (and dad) always told me that guys like you were a rare breed, and to hold onto you forever. And now I get to! Happy 4th and last anniversary! I can’t wait to start this new chapter called “marriage” with you.
I love you! It’s us against the world now.”

Camille was very patient while waiting for Jay to “pop the question”.  She would always say . . .  “Some day.”   She even had a Pinterest board where she pinned her wedding dreams called “Some Day”.

In October of 2015, Jay asked me to style the proposal dinner.  It’s theme would be “Some Day”.  He was planning to propose while they were home for Christmas! Camille’s mom and dad would fly in for the surprise! 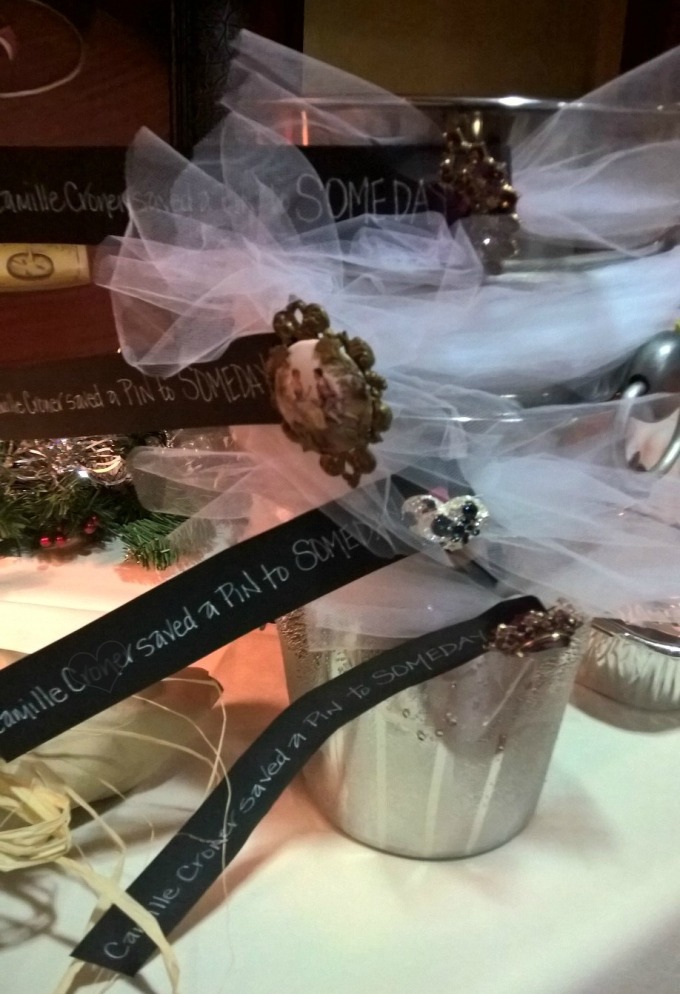 I kept it very simple.  I used vintage brooches to re–pin Camille’s dreams of “Some day” . . . the real way . . . to centerpiece champagne buckets! 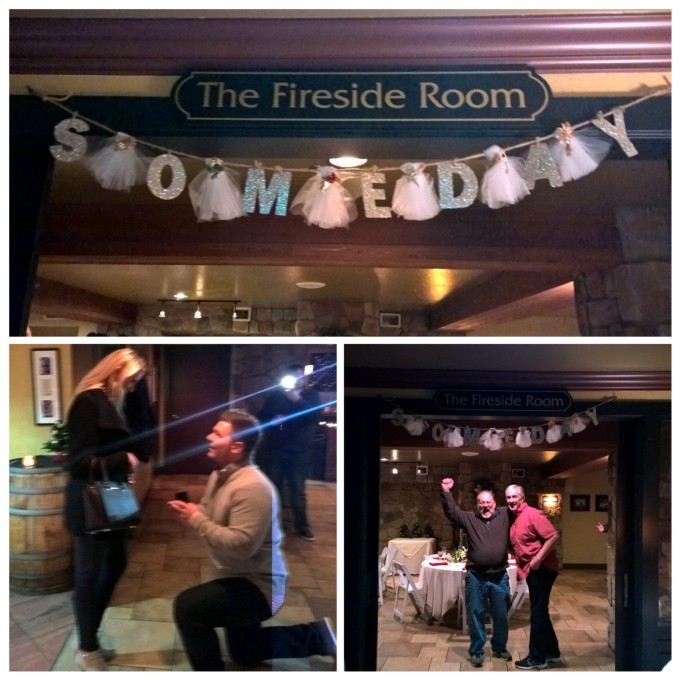 I hung a banner with Pottery Barn German glass letters and vintage pins above the French doors that opened into the private dining room.

On December 28, 2015, the Fireside Room at Mama Stortini’s was filled with family and friends when Jay proposed to Camille while Sinatra sang, ‘The Way You Look Tonight”.  ( You all know the first two words of the iconic song. )

The banner now hangs in Jay’s old room, now a guest room, beneath a piece fashioned by Doré Callaway to commemorate what I now know to be Camille’s favorite memory of their life together thus far.  ( The vintage pins, from my mother and my grandmothers were gathered to be placed into Camille’s wedding bouquet. Her mom is amazingly talented . . . I cannot wait until I get the privilege to post it for all of you to see.)

The “Shower With Love” weekend began at dinner time on Friday night, when Camille’s mom and dad arrived . . . we revisited Mama Stortini’s.

Saturday morning, I made Jay’s favorite breakfast of biscuits and gravy.

The official wedding season “opener” was to follow at 2 o’clock. The traditional “Couples Shower” was hosted at the home of two of our closest friends, who are the mother and father of Jay’s best friend and best man Ty.

Our two families met on a T-ball field.  Jay and Ty played on the same team from that very first season through high school.  After high school, Jay played two years of college baseball, and Ty went to Washington State. Following his sophomore year, Jay hung up his cleats to seek a degree in broadcast journalism at The Edward R. Murrow School of Broadcast Journalism at Washington State.  At that time his sister, Chrislyn was a senior finishing up her political science and criminal justice degrees and Ty was a in pursuit of his degree in sports management.  Jay and Ty would be roommates in a Delta Tau Delta live out for two years.  After graduation, they hung their tassels on the rear view mirror and drove home together. 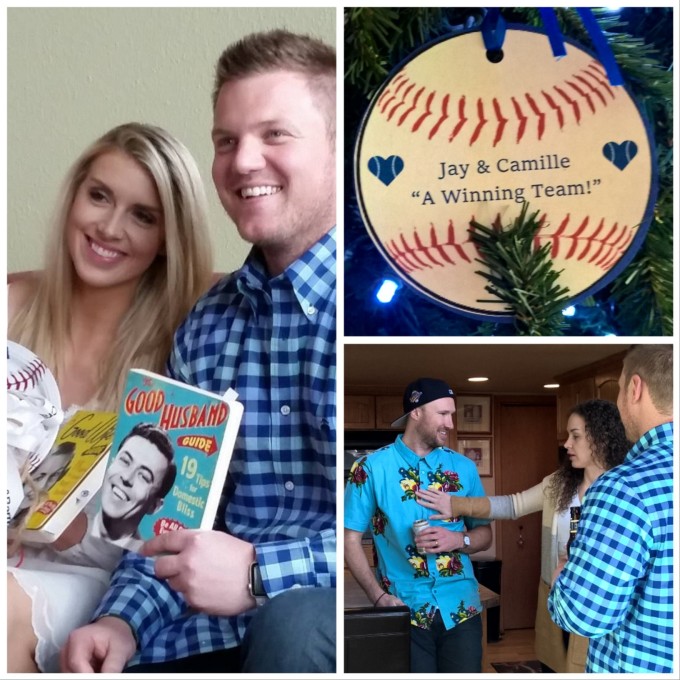 It was both fitting and fun that Alice styled the “couples shower” into a baseball theme. The menu was vast including the best of “ballpark” kicked up a  natcho bar with sangria, dogs with brews, Steve’s beans, DeAnna’s baseball cake pops, and Doreen’s sugar cookies shaped into mitts and bats.  We stayed late . . . all diving face first into bed when we all returned to 34.

Jay and Camille were visibly moved by the love and generosity of the day.

Sunday, I was up at five to finish preparing the food I was to bring to Chrislyn and Jason’s home for the Sunday Bridal Brunch / Shower. 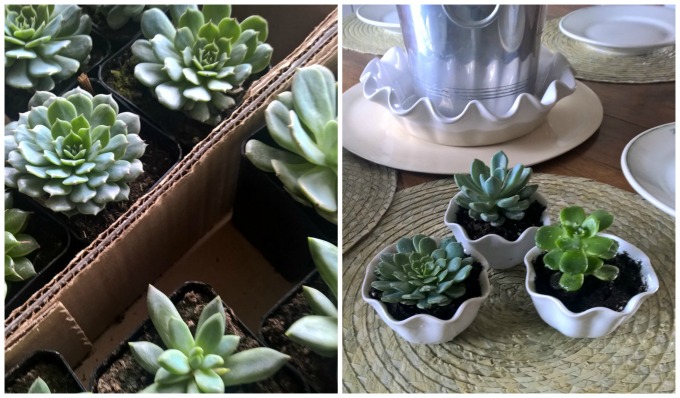 The mini succulents were re-potted and ready to be gifted as party favors. I was to bring the cheeses, the fruits, the nuts, the chocolates and the croissants. 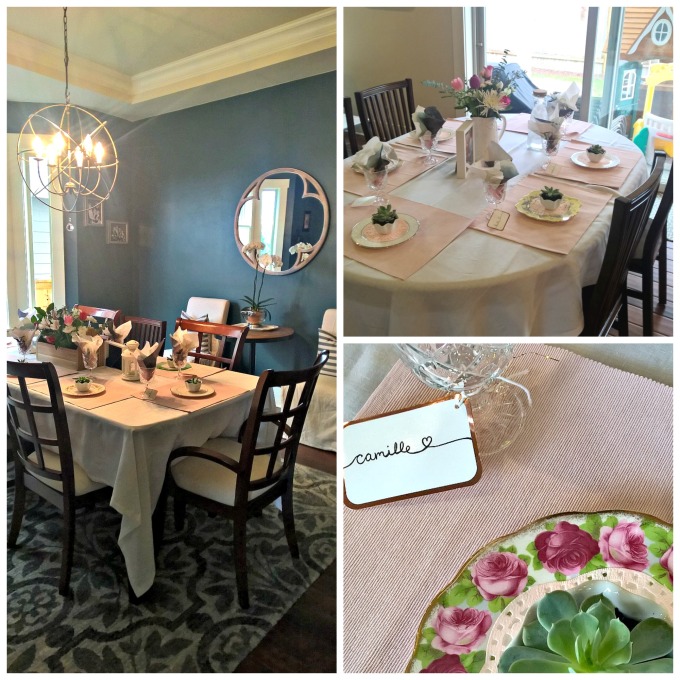 Chrislyn hosted the Bridal Brunch / Shower. She had three tables set for 20 guests. She made pretty paper lace banners, printed images from Camille and Jay’s engagement photos and collected images of their childhood to display within the food and festivities. We styled the event, with Ikea finds, flowers, potted succulents, and a collection of a lifetime of bone china and glass plates that once belonged to my grandmothers.  I managed to capture a few images as we pulled it all together. 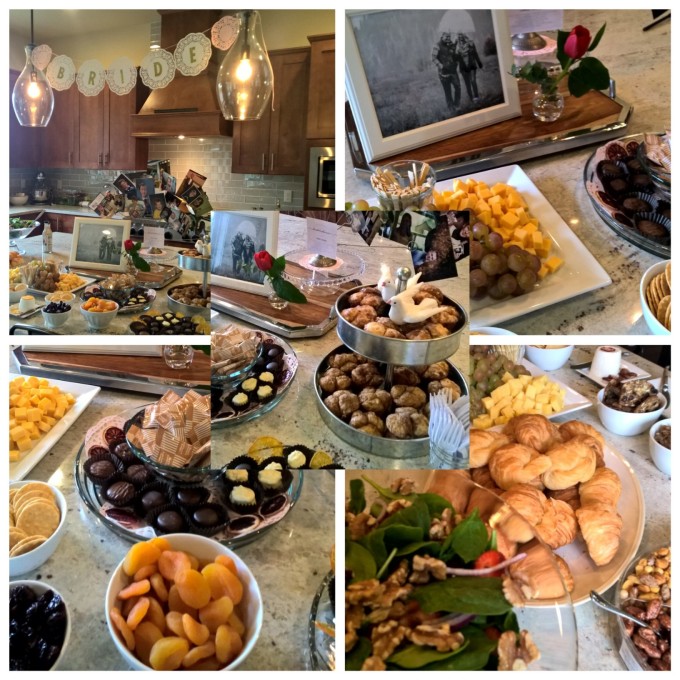 A quick photo with Camille, Ashley and Chrislyn before clean up.  I have to laugh and throw in . . . five days before this picture I had an emergency root canal and missed my hair day! Jennifer Connolly from A Well Styled Life and I were in the dentist chairs on the same day!  I looked so bad that the pharmacist told me there would be “no wait time” as I looked like I was having a bad day! 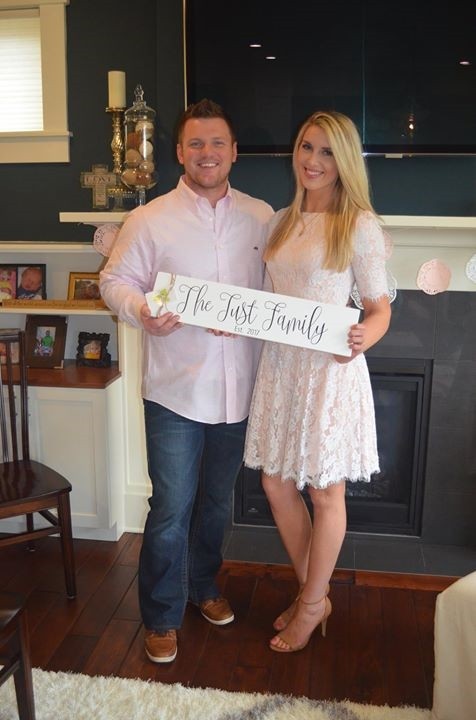 Jay and Camille feeling very blessed and lifted by love.  I must tell you about her dress in a future post!

This week I will be addressing their wedding invitations . . .

Their best day ever will be here before we know it!